Mr. Patel served as the Chief of Staff to the Department of Defense (DOD), where his responsibilities included implementing the Secretary’s mission using our 3 million plus employees, operating a $740 billion budget, and $2 trillion in assets.
Prior to his experience at the Pentagon, Mr. Patel served as Deputy Assistant to the President and Senior Director for Counterterrorism (CT) on the National Security Council (NSC). In that capacity, Mr. Patel oversaw the execution of several of President Trump’s top priorities, including eliminating Al-Qa’ida and ISIS senior leadership, and safely repatriating dozens of American hostages. As the top counterterrorism official at the White House, he was responsible for creating and implementing our nation’s policy to safeguard the homeland by overseeing the interagency implementation of the national CT strategy.
Mr. Patel was also selected to serve as Principal Deputy to the Acting Director of National Intelligence. At ODNI, he oversaw all 17 Intelligence Community (IC) agencies, and prioritized intelligence collection to focus on hard targets and global threats. This allowed him to lead the Director’s duty to synthesize our intelligence holdings and create the President’s Daily Briefing, which he would then brief to the President and cabinet officials. As one of the highest ranking officials at DOD, ODNI, and the White House, Mr. Patel gained unique expertise straddling the nexus of government and private sector operations/policy for the defense of our nation to include defense, cyber, and intel.
Before joining the NSC, Mr. Patel served as the National Security Advisor and Senior Counsel for the House Permanent Select Committee on Intelligence (HPSCI), where he spearheaded the investigation into the Russian active measures campaign to influence the 2016 presidential election. Concurrently, he led congressional oversight of sensitive programs for the IC and U.S. Special Operations Forces and worked to enact legislation to fully fund the multi-billion-dollar budgets supporting intelligence and counterterrorism operations worldwide.
Mr. Patel joined HPSCI following his tenure as a national security prosecutor at the Department of Justice (DOJ) under the Obama administration, where he led investigations spanning multiple theaters of conflict and oversaw the successful prosecution of criminals aligned with Al-Qa’ida, ISIS, and other terror groups. This work necessitated Mr. Patel’s presence in locations across the globe, collaborating with host nation governments to successfully prosecute terrorists. He also served as the DOJ Liaison Officer to Joint Special Operations Command (JSOC), working with our nation’s most prestigious counterterrorism units (special forces) to conduct collaborative global targeting operations against high value objectives, in almost every theater of war.
Mr. Patel began his career in 2005 as a public defender, trying scores of complex cases in federal and state courts, ranging from murder, to narco-trafficking, to complex financial crimes. This required extensive briefings and court appearances. These cases took place throughout the U.S., in over half a dozen countries, and required Mr. Patel to diplomatically engage with several foreign governments.
A native of New York, Mr. Patel graduated from the University of Richmond with a bachelor’s in criminal justice and history, received a juris doctor from law school in New York, and a Certificate in International Law from University College London Faculty of Laws in the United Kingdom.
*Mr. Patel left government service in January 2021 and is now in the private sector.
Speaking At
Deep State is gonna Deep State 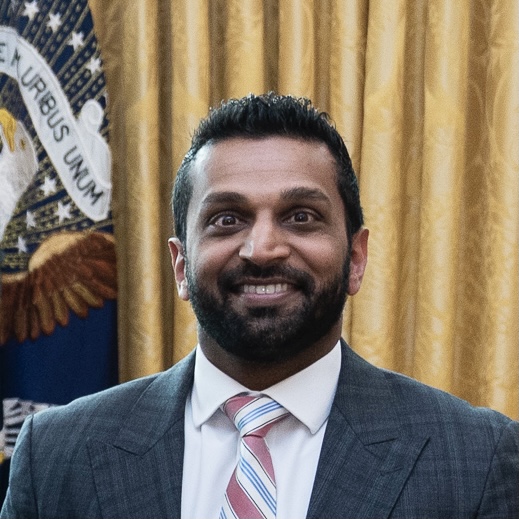